Paytm re-assures of coming back to playstore 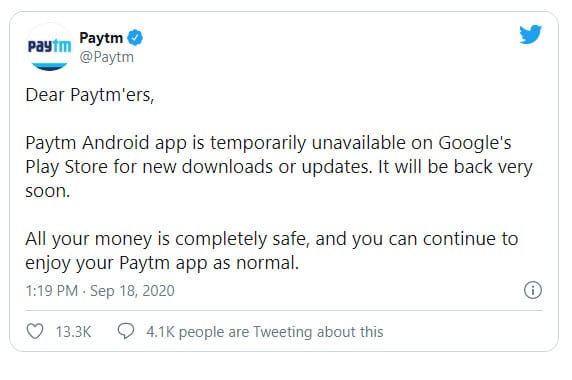 Earlier on Friday, 18th Sep 2020, Google had pulled the popular Indian Financial service provider Paytm which has more than 50 million users saying that Paytm had been actively involving in business related to casinos and other unregulated gambling apps which is against the contractual and agreement terms. Paytm’s fantasy sports service, called Paytm First Games, was also available as a standalone app, which has been pulled from the Play Store, too.

Google had taken this action as a preemptive attempt from the company to remind other developers about its gambling policies ahead of the popular cricket tournament Indian Premier League, which is scheduled to start on 19th September 2020 in venues located in the United Arab Emirates.

India’s smartphone market is controlled by Android operating devices and it contributes more than 90% of the total market. Here is the importance of Google and its Playstore plays. Android also had it says regarding the ban: “We have these policies to protect users from potential harm. When an app violates these policies, we notify the developer of the violation and remove the app from Google Play until the developer brings the app into compliance,” wrote Suzanne Frey, vice president, Product, Android Security and Privacy, in a blog post.

In an interview with TechCrunch – an online reporting medium, Madhur Deora, president of Paytm, said Google did not raise any issue about Paytm First Games app today. He said Paytm had rolled out the cricket-themed sticker for cashbacks early Friday. Hours later Google raised objection about it and suspended the app. He said the company had pulled the new feature and submitted the revised version of the app to the Google Play Store.

Paytm is Indias Most Valued startup venture with worth over $16 Billion as per latest evaluation. Google’s financial product Google Pay is a competitor to Paytm but has not succeeded to grab the market as Paytm did.

Dubai Global Village Announces The Date of Its Upcoming Season